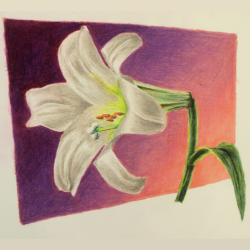 Buried in my Grave

In 1858, Henrietta Duterte (pronounced DU-tee-air), was a free black woman living in Philadelphia. Her husband was a coffin-maker and undertaker. When her husband passed away, she broke societal norms and taboos by taking over her husband’s business – becoming the first woman in the nation to become an undertaker.

But beyond being the first female undertaker, Duterte found other ways to defy society: she was a dedicated abolitionist, and after her husband’s death, she became an agent of the underground railroad, helping slaves escape from the south to continue their journey north.

She cleverly used her business as a means to help slaves. How do you use an undertaking business to help slaves escape to freedom? Simple. You package the escaped slave into a coffin, and with accompanying mourners and grave diggers, march the coffin in plain sight down the streets of Philadelphia to a cemetery. Once outside the city on the road north, the coffin is opened and the slave continues the journey to freedom.

I find myself wondering about the inevitable logistic concerns -- what would happen if the cemetery was occupied by other mourners, and there was no opportunity to revive the "corpse"? Would the slave be buried, in hopes that he could be dug up before suffocating?

How desperate would you have to be to willingly allow yourself to be packaged and sealed like a dead man into a coffin?

Desperate enough that the slaves would sing songs with lyrics like: “Before I’ll be a slave, I’ll be buried in my grave.”

In the context of Duterte work, those lyrics take on a terrifying significance: put me in the coffin, and if I never come out, I’m still better off than I was.

In ancient Greece and Rome, the connection between slavery and death even appeared in their language; the greek word for slave was soma. Literally, the word means, “body” or “corpse.” To the Romans, a slave was nothing more than just a body or a corpse.

I hope you understand how horrible this really is – to be able to look at another human being and regard them as nothing more than a “useful corpse.” Something to be used, and then simply disposed of.

And for a slave, the only guaranteed path to freedom was the grave. In that regard, Duterte’s actions were not just courageous, they were also deeply symbolic.

But what does any of this have to do with Easter? Why would I want to talk about slavery on this blessed morning of Resurrection celebration? The answer is found in our scripture reading for the day: Romans 6.

Paul is a citizen of Rome, and since he’s writing his epistle to believers in Rome, his audience understands exactly how slavery works. So he uses slavery as a metaphor to help us understand our relationship to sin.

6:4We were buried therefore with him by baptism into death, in order that, just as Christ was raised from the dead by the glory of the Father, we too might walk in newness of life.5For if we have been united with him in a death like his, we shall certainly be united with him in a resurrection like his.6We know that our old self was crucified with him in order that the body of sin might be brought to nothing, so that we would no longer be enslaved to sin.Romans 6:4-6 (ESV)

Did you catch the slavery words in verse 6? There are two of them. One is a bit more obvious than the other – the word “enslaved” jumps out at us in the context of this message!

The other word is “body,” which is exactly the same Greek word as is used for slavery. Paul is making a bit of a pun -- when he talks about the body of sin being brought to nothing, you should read that as: “...that the slavery of sin might be brought to nothing.”

Sin is an even worse slave master than any human – there’s no hope of sin saying, “Sure, you’ve served me well, so I’ll set you free.” Death is the only remedy for sin slavery.

In effect, Paul is saying: “The purpose of the crucifixion was to kill you, because death is the only way to escape slavery.”

To see that this is what he’s saying, look at verse seven:

If that’s all that Paul had to offer us, we’d be in pretty tough shape: “Congratulations, you’re no longer a slave to sin. True, you’re dead, but at least you’re not a slave anymore.”

This is the power of the empty tomb: through the crucifixion, Christ put to death our slavery to sin, but through his resurrection, he brings to us a new life that is free of that slavery.

Henrietta Duterte’s escaped slaves made their way to freedom by faking their own deaths. Unlike those slaves passing through the Underground Railroad, we’re not faking. Our sin-serving spirit has been truly and really crucified with Christ, and our spirit has been really and truly resurrected to freedom.

I always thought the resurrection was just about the hope of eternal life, the promise of being reunited with loved ones who have gone on before us and the rewards for service to God.

It’s the sweet by and by, the land that is fairer than day. Or, as Isaac Watts described it: There is a land of pure delight, where saints immortal reign; infinite day excludes the night, and pleasures banish pain. Or, as we sang as kids: “I’ve got a home in gloryland that outshines the sun.”

These things are all true, but they are only half the story.

Paul tells us that our resurrection begins NOW, not on that future day when our bodies are raised to eternal bliss.

6:11So you also must consider yourselves dead to sin and alive to God in Christ Jesus.12Let not sin therefore reign in your mortal body, to make you obey its passions.13Do not present your members to sin as instruments for unrighteousness, but present yourselves to God as those who have been brought from death to life, and your members to God as instruments for righteousness.14For sin will have no dominion over you, since you are not under law but under graceRomans 6:11-14 (ESV)

The crucifixion is freedom from slavery – the resurrection is power over sin. Right here. Right now.

That’s why Paul says in 2:6and raised us up with him and seated us with him in the heavenly places in Christ Jesus,Ephesians 2:6 that we’re already seated with Christ in heavenly places. Not in the future. Right now.

One of the tragedies of the post-slavery era in the United States was that slaves had become so accustomed to serving, that the former slave-owners knew they could continue to command, and in many cases, the former slaves would continue to obey.  And so men and women who had been set free continued to live as though they were slaves.

When Paul says “don’t let sin have dominion over you,” that’s what he’s talking about: “Sin used to be your master. Sin is no longer your master. But sin will keep on pretending that it still has authority over you. Don’t believe the lie.”

In the South, former slaves lived in fear, for if they refused to obey the commands of people who had no right to command them, they still risked beatings and even lynch mobs.

But Paul wants us to understand: Sin has absolutely no power over you!

To be set free from sin and yet live as though it still had mastery over you is like a homeless man inheriting a million dollars, yet continuing to live a homeless lifestyle because he can’t believe his good fortune.

Jesus said, “I have come that you might have life, and that you might have it abundantly.” This is the power of the resurrection -- the unprecedented power to look lust and hate and greed and selfishness and pride in the eye and say, “Sin, you’re not the boss of me!”

Earlier I mentioned the lyrics: “Before I’ll be a slave, I’ll be buried in my grave” but there is another lyric that was sung by the enslaved people, and it is a lyric filled with hope: “Dem bones gonna rise again.”

And this morning I want to tell you that yes, dem bones gonna rise again, but the resurrection is also the powerful truth that the spirit of the believer has already been raised, and seated with Christ in heavenly places.

On this page you will find links to sermons that have been requested in written form, as well as transcripts of seminars taught at various conferences over the years.

Most of the content on this site is found in our Illustrations blog. This blog contains shorter articles which provide helpful object lessons for teaching scripture passages.

The library is our blog in which we suggest resources that we have found valuable in ministry.