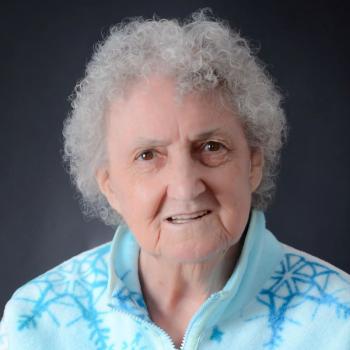 Today I had the privilege of sharing at the funeral service for a beloved lady of our church. The following is a tribute to her, but also to all who faithfully and quietly serve.

Eulogy for a Faithful Saint

Several years ago, back when Ruth was living at her home on the Buckfield Road, I was visiting her one afternoon, and the conversation turned to food, and specifically, to cookies. Now, I don’t know how the conversation ended up there – in retrospect I suspect Ruth might have steered it that way.

I love cookies. And my favorite kind – the kind I’ve loved most since childhood – is no-bake-cookies. Don’t get me wrong, I love cookies of all sorts – I’m happy with snicker doodles, chocolate chip, and any other variety of cookies – but give me a no-bake cookie and it feels like a little piece of heaven has descended to earth and touched my taste buds.

I can’t say for sure how my conversation with Ruth ended up there, but I can say for sure that a few weeks later I went to church and Ruth showed up with a big smile on her face and a baggie of no-bake cookies for me.

I thought that was going to be a one-time thing. I was wrong. It became a tradition. Probably two or three times a year she would show up to church with that smile and another baggie of cookies. It got to be a sort of inside joke between us.

When her health started to deteriorate, and she wasn’t as regular at church, still, once in a while, she’d show up for church, and she’d have the smile and the baggie. Her health continued to decline, to the point that it was difficult for her to do cooking, but still she would bring cookies. It’s probably a good thing they were “no-bakes”. Last week I was talking to Ruth’s daughters, Kathie and Patty, and one of them brought up the topic of the cookies. With a bit of a twinkle in her eye, Patty said, “I expect the quality of those cookies was starting to go downhill toward the end.” And I replied, “But they were always appreciated.”

Several times in the last two weeks I’ve heard people comment that Ruth used to sing in the church, and she sang in the choir for many years. But that, also, was not my memory of Ruth. Choir might get you noticed by the adults in the church, but not so much by the children. I’m sure I saw her up there in the choir loft, week after week, but that wasn’t the memory I have of her.

My memories involve Sunday School. When I was in first, second, and third grade, every Sunday at the beginning of Sunday School, all three grades gathered together downstairs, in those tiny little wooden-slatted chairs, and Mrs. Lawrence, the Primary Department Superintendent, would lead us in prayer, she would have children with birthdays come forward to blow out candles, give a birthday offering, and receive a birthday treat. It was Mrs. Lawrence who taught me songs like “I Will Make You Fishers of Men” and “Stop and let me tell you what the Lord has done for me” and “The wise man built his house upon the rock”

If you ask people of my generation about Ruth Lawrence, these are the memories you will probably hear about. Not that she sang in the choir, but that she taught us all the songs we loved to sing. For people of my generation, it was Ruth Lawrence, and others like her, who formed the backbone of the church. It was Ruth Lawrence, who led primary Sunday School. It was Jessie Hanes, who led the Eager Beavers program. Phyllis Whitney, who taught us all the books of the Bible. Margaret Knightly who played the accordion and led us in singing when we were in the junior department. And all of those faithful servants who devoted years, decades of their lives to training up a generation, week after week.

“Ruth Lawrence,” people tell me, “served faithfully for many years in Sunday School.” So I would ask, “How many years?” “I don’t know,” was always the answer I got. It’s a mystery so deep that not even Ben Conant knew the answer.

What I do know is that when my dad finished grad school and they moved back to Oxford Hills area, Ruth was doing Sunday School then, and she was still doing Sunday School in the mid-eighties; I know because I have this lovely diploma-style certificate she was given (read certificate).  That means she served for – at a minimum – two decades.

It occurs to me that if you want to gain honor and recognition, devoting decades of your life to teaching children’s Sunday School is not the way to go about it. Yes, she had her moment in the spotlight when she got this certificate, but I certainly don’t remember it happening, and when I asked the SS Superintendent who signed this certificate, he didn’t remember it either.

But this is no surprise or disappointment to you, because you know the words of Christ in Matthew 6: “Beware of practicing your righteousness before other people in order to be seen by them, for then you will have no reward from your Father who is in heaven…do not let your left hand know what your right hand is doing, so that your giving may be in secret. And your Father who sees in secret will reward you.”

Jesus himself was Ruth’s – and our – example of that sort of service without showing off. In John 7, when Jesus’ brothers were getting ready to leave for the festival of booths, they taunted Jesus, saying, “Leave Galilee and go to Judea, so that your disciples there may see the works you do. No one who wants to become a public figure acts in secret. Since you are doing these things, show yourself to the world.”

Go ahead, Jesus, show off. Knock our socks off, come into Jerusalem with a big parade and fanfare. We know it’s what you want – to be noticed and admired. To get the keys of the city, and a nice big plaque to hang on your wall!

But Jesus’ desire was NOT to be noticed, admired and honored. Jesus’ answer was simple and direct: “It’s not my time.” Of course, we know that a day came when it WAS his time; he would ride into Jerusalem amid fanfare and parade, and that path would lead him to the cross of Calvary where he would bear the weight of the world’s sins on his body. But this time, instead of going up to the feast with a fanfare and a parade, John reports: “after his brothers had left for the festival, he went also, not publicly, but in secret.”

It is the quiet and unnoticed work done without fanfare day after day, week after week, year after year, that forms the backbone of the church. It is the cup of water (could we even dare to say ‘no-bake cookies’?) given for Jesus’ sake. It is the little one we encourage to come to Jesus without hindering. It is the visit to the poor, the sick, the imprisoned. It is to care for the widows and the orphans. It is to share the glorious truth of hope in Jesus Christ. It is the word of hope given to one who is discouraged, and the word of mercy given to the one needing forgiveness. These little things, these things that no one notices or pats you on the back for, these make up the glory and the beauty of the Christian life.

But why? Why would Ruth – and so many others – devote their life to things that will remain unnoticed and unrewarded? I remember seeing a t-shirt that said, “My grandmother went to the Grand Canyon, and all I got was this lousy t-shirt”. Does anyone who serves in these quiet, faithful ways ever think to themselves, “I spent 20 years teaching songs to little children, and all I got was this certificate?”

Hear these words of Christ from Matthew 25: “A man [went] on a journey, who called his servants and entrusted his wealth to them. To one he gave five talents, to another two, and to another one, each according to his ability. Then he went on his journey. The man who had received five talents went at once and put his money to work and gained five more. So also, the one with two talents gained two more. But the man who had received one talent went off, dug a hole in the ground and hid his master’s money. “After a long time the master of those servants returned and settled accounts with them. The man who had received five talents brought the other five. ‘Master,’ he said, ‘you entrusted me with five talents. See, I have gained five more.’ “His master replied, ‘Well done, good and faithful servant! You have been faithful with a few things; I will put you in charge of many things. Come and share your master’s happiness!’

And the story goes on, but we can stop here, because these words answer our question. Why would one devote their lives to the little things, the unnoticed and unrecognized things? Because it is to those who are faithful in small things that the master says, “come and share your master’s happiness.”

For Ruth, as for every faithful believer in Christ, death is more than a passing out of this life; it is the long-awaited promotion to the master’s happiness.

And so to you, Ruth Lawrence, faithful servant, we say, “Your time has come. We wish we could see the parades and hear the fanfares that welcomed you into your heavenly home.” And for those of us who remain, we take comfort in knowing that while we wait for that day when we see her again, she is already, like the servant in Jesus’ parable, enjoying her master’s happiness.

“Blessed be the God and Father of our Lord Jesus Christ! According to his great mercy, he has caused us to be born again to a living hope through the resurrection of Jesus Christ from the dead, to an inheritance that is imperishable, undefiled, and unfading, kept in heaven for you.”

On this page you will find links to sermons that have been requested in written form, as well as transcripts of seminars taught at various conferences over the years.

Most of the content on this site is found in our Illustrations blog. This blog contains shorter articles which provide helpful object lessons for teaching scripture passages.

The library is our blog in which we suggest resources that we have found valuable in ministry.