As a child growing up on a small farm, there were many chores I disliked. Shoveling out the barn, weeding the garden, feeding chickens, and the pig...

But there was one thing I disliked more than all the others. One yearly event that I dreaded. Haying.

That was one of the hottest, sweatiest jobs imaginable. Whether I was in the hayloft throwing and stacking bales, or out in the fields putting bales onto the trailer (yes, we did it the old fashioned way...for us a "thrower" had two legs, two arms, and very tired muscles), haying was a miserable job. If you were in the hayloft, the heat and the humidity were enough to kill an ox -- let alone a ten-year-old boy -- and if you were in the field you had to suffer with the summer sun baking and roasting everything in sight.

And no matter where you were, you had to deal with that rough, dried stubble scratching against your skin.

But being in the fields did have one advantage over being in the hayloft: when you were in the field, there would be an occasional moment of relief. When a strong, cool breeze would come wafting across the fields, the breeze would touch every part of you as it passed by, bringing a bit of relief from the heat. It made a miserable chore bearable, and for that brief moment you would find yourself thinking, "Aaaah! I'm going to make it through this!"

The book of Proverbs tells us this:

25:13Like the cold of snow in the time of harvest is a faithful messenger to those who send him; he refreshes the soul of his masters.Proverbs 25:13 (ESV)

How true that is! How many times have you been in a position where you asked someone to do something, or they said they would do something, and then they never followed through? Do you remember that feeling? The frustration, the failed plans, the discouragement you feel can be as oppressive as the summer heat.

But someone who does what they say they will do, who you can count on to fulfill their promises -- that is a person as refreshing as a breeze blowing in off the snow-covered mountains, bringing relief and joy.

So...which kind of person are you?

The Windsor Guildhall
Posted by Douglas on Feb 28, 2006

In the 1600s (aproximately 1688) Christopher Wren, a well-known architect, was commissioned by the Windsor town councillors to build the Windsor Guildhall -- a picture of which is shown below. 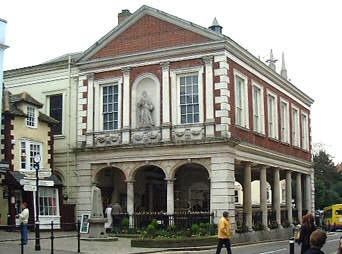 As you can see from the picture, the ground floor of this building is completely open, with the main part of the building being supported by eighteen pillars around the edge. This open space was designed to be used as a public market.

When the town councillors saw what Wren intended to do, they (in their infinite architectural wisdom) protested to the great architect that his design would never work. Eighteen pillars would not be enough to support the weight of the building, and the whole thing would collapse.

Christopher Wren insisted that his design was solid and safe, and an argument ensued. The upshot of it all was, Christopher Wren agreed to add four more columns into his design. These four columns were interior columns, and can be seen in the picture below. 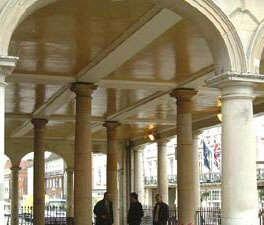 But Christopher Wren had the last laugh; when he designed the four inner pillars, he deliberately designed them to be two inches too short; the tops of the columns do not even touch the beams of the ceiling. They bear no weight at all!

Over the centuries, many people have had a good laugh at Christopher Wren's subtle jab at the town councillors (although today, if you visited the guildhall you would discover that at some point wooden shims have been placed above the pillars, so they really do bear weight.)

But Christopher Wren obviously knew what he was doing; for centuries this building stood strong and tall without those center columns supporting any weight.

The book of I Peter describes the church as a building -- not made of stone, but of living stone. We, as Christians, make up the structure of the church.

2:4As you come to him, a living stone rejected by men but in the sight of God chosen and precious,5you yourselves like living stones are being built up as a spiritual house, to be a holy priesthood, to offer spiritual sacrifices acceptable to God through Jesus Christ.1 Peter 2:4-5 (ESV)

Just as people rejected and disbelieved Christopher Wren's architectural plans, mankind has rejected the foundation (Jesus Christ) upon which God is building His church. But our foundation is a foundation which will never disappoint, and the structure built on that foundation will never collapse.

But God is not like Christopher Wren; unlike Wren, God has not put any "useless" columns in His church. The book of Ephesians tells us that we are all being fitted together. There are no useless or unimportant parts in God's building. We each have a part to play, a work to do, a section of the building to support. And when we choose not to do our part, the whole building suffers.